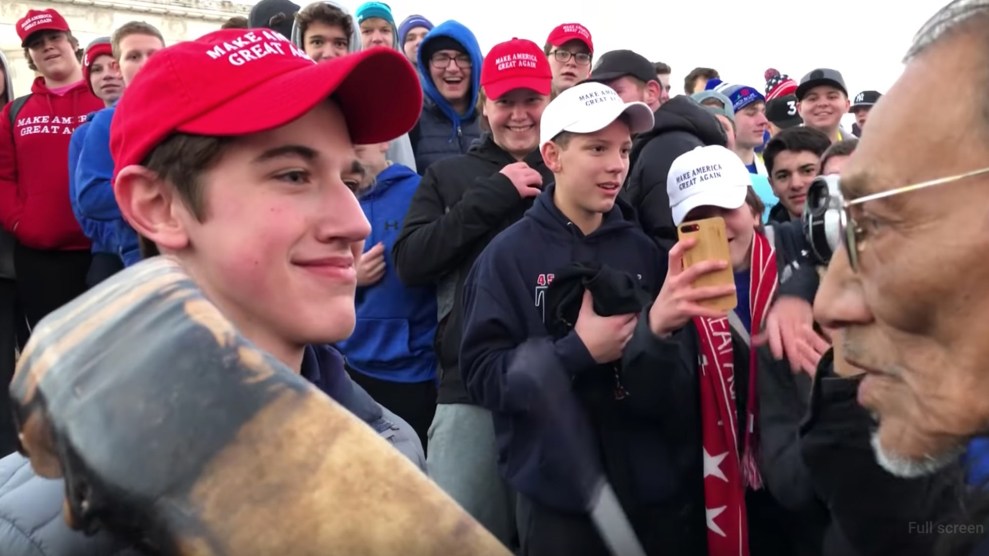 I do not typically tag myself into the political ping pong games often played on social media. I’ve learned over time that the opinions of others, particularly about things that do not directly affect them, will be just that, their opinions. I’ve learned that most people have little to no interest in hearing or considering other perspectives and frankly, why would they? It is much easier to find comfort behind carefully crafted shades rather than seeing the world with eyes wide open. For most, especially those who know their view is tainted with misinformation or will carry the weight of being held accountable, believe that a distorted view is still a view.

The recent outrage over the MAGA hat wearing Catholic school boys’ vs the Native American elder has sparked a powerful dialogue regarding the glorification of the white male and the persecution of any and everyone who is not. When I first began writing this blog the narrative focused solely on whether or not the Covington High boys displayed disrespectful and racist behavior or if the situation was a simple misunderstanding.

In the days that followed, more details emerged and we even saw footage of a small group of black men identified as Black Israelites shouting obscenities at the Covington High boys. The public was expected to believe that the conflicts were unprovoked and unexpected in nature.  To be clear, I do not condone grown individuals of any kind yelling and acting aggressively toward children. This account of events, coupled with Mr. Phillips need to drum peace into the situation opens a larger discussion as to why the presence of “good catholic boys” created such discord on this particular day. It occurred to me that whether or not the Covington High boys acted inappropriately or whether smirking boy was truly trying to show solidarity, quickly becomes irrelevant when we remind ourselves that in midst of all the events that occurred that day, these boys still stood, danced, taunted, teased and acted as “boys do,” with the fascist symbol of today’s America plastered on their heads, a “Make America Great Again,” hat.

I recently read a headline that said, “Red Hats Are the New White Hoods.” Suddenly the world was beginning to see this situation from the same crystal-clear lenses I’d been viewing it from the moment the story broke.  The details of this story and the remix we were fed had become less about whether it did or did not happen and more about the symbolism hiding in plain sight. The sea of red MAGA hats seen across every picture and every video told a story greater than youth failing to respect their elders, yet it was the one detail, and in my opinion the most important detail, that everyone was failing to discuss—until now.

You see, the MAGA hat has become to people of color and disadvantaged populations what black boys in hoodies are to most of white America. There should be no surprise that a group of white boys in MAGA hats would be viewed as a perceived threat. There is a stigma that lingers when such groups gather, although these groups have been gathering in this way for decades. History tends to repeat itself that way. After all, “Red Hats Are the New White Hoods…”

It’s interesting that when symbolism begins to threaten the character of white America then red hats are just red hats. It doesn’t matter that red hats show up at rallies about what women should do with their bodies or stand firmly with smug looks that do not flinch or speak—because after all Mr. Phillips walked up to him—so why should smirking boy move. It doesn’t matter that these particular red hats suggest that America’s path to greatness can only look one way. Red hats are just red hats yet black boys in hoodies are never just black boys trying to stay warm on a cool day.

Someone on Facebook recently said boys at that age do not take a political stance. Boys at that age simply parrot the beliefs of their parents and that the MAGA hat worn proudly was less about being a fascist and more about the fashion of it.

We are living in a time where teenagers are heavily invested in the state of society. Perhaps many of their views are swayed toward that of their parents, but these views are still views they’ve adopted and continue to live by. These boys knew what they were doing when they wore those hats on that day to a pro-life rally. They knew what they were doing when they kept them in place, even after conflict stirred, even after angry black men accused them of the vilest things, even while standing steadfast and awkwardly smirking…

The statement these boys were making, both passively and blatantly, was that they represent the definition of a great America. This MAGA hat became their armor. This MAGA hat became their signage and ultimately the driving force behind everything that occurred from that moment forward. It is the mentality this hat creates that cause white America to change the narrative from a disrespectful teen to a “good old catholic boy.”

I don’t know if smirking boy stood before Mr. Phillips with the intent to keep peace or create conflict. I wasn’t there just like many others were not there. What I know, is that a group of white males gathered rambunctiously in the middle of the Lincoln Memorial while multiple rallies occurred wearing hats that present a growing belief that American can only be great if it looks and feels a certain way.

These boys are not naïve. They do not avoid watching the news or scrolling (and in some ways trolling) social media, and they certainly do not avoid open discussions about what is perceived to be right and wrong in this country. They are fully aware of the impact of the “Make America Great Again” movement and the unrest it has created across this country—even the world at large.

But then again, “red hats are the new white hoods,” so what we get is a group of pretentious, entitled boys who expect society to believe that they did nothing more than smile when someone who did not look like them, did not represent them, simply walked up to them…

A few days after this all began and after several debates, a Facebook associate wrote, “would I walk around in a MAGA hat? No. Would I walk around in a pussy hat. No. But I respect everyone’s individual right to do so…” She went on to share a vignette about a man walking around in a ‘Jesus is a CUNT’ t-shirt,” while she vacationed in Europe as if any of these things should live in any justifiable thought.

Distorted views to most are better than no view at all, although a distorted view remains the worse view one can have.

Dr. Martin Luther King Jr. once said, “The ultimate measure of a man is not where he stands in moments of comfort and convenience, but where he stands at times of challenge and controversy.”

It is those who stand by their distorted views that struggle to understand why a group of white males wearing MAGA hats can incite strife among a group of people fighting for the right to have control over their own bodies, people trying desperately to be viewed as more than just black boys in hoodies and simply drummers who would not move even when white America smiles at them. It is cynicism at its finest…